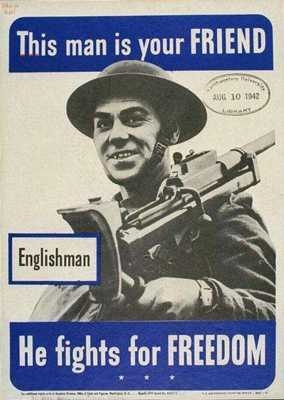 Even more significant was the tremendous increase in mobility. The war set families in motion, pulling them off of farms and out of small towns and packing them into large urban areas. Urbanization had virtually stopped during the Depression, but the war saw the number of city dwellers leap from 46 to 53 percent.

War industries sparked the urban growth. Detroit's population exploded as the automotive industry switched from manufacturing cars to war vehicles. Washington, D.C. became another boomtown, as tens of thousands of new workers staffed the swelling ranks of the bureaucracy. The most dramatic growth occurred in California. Of the 15 million civilians who moved across state lines during the war, over 2 million went to California to work in defense industries.

The war had a dramatic impact on women. The sudden appearance of large numbers of women in uniform was easily the most visible change. The military organized women into auxiliary units with special uniforms, their own officers, and, amazingly, equal pay. By 1945, more than 250,000 women had joined the Women's Army Corps (WAC), the Army Nurses Corps, Women Accepted for Voluntary Emergency Service (WAVES), the Navy Nurses Corps, the Marines, and the Coast Guard. Most women who joined the armed services either filled traditional women's roles, such as nursing, or replaced men in non-combat jobs.

Women also substituted for men on the home front. For the first time in history, married working women outnumbered single working women as 6.3 million women entered the work force during the war. The war challenged the conventional image of female behavior, as "Rosie the Riveter" became the popular symbol of women who abandoned traditional female occupations to work in defense industries. Social critics had a field day attacking women. Social workers blamed working mothers for the rise in juvenile delinquency during the war.

In 1941, the overwhelming majority of the nation's African American population--10 of 13 million--still lived in the South, primarily in rural areas. During the war, more than one million blacks migrated to the North--twice the number during World War I--and more than two million found work in defense industries.

Black leaders fought discrimination vigorously. In the spring of 1941 (months before America entered the war), the president of the Brotherhood of Sleeping Car Porters, A. Philip Randolph, with strong backing from the National Association for the Advancement of Colored People (NAACP), called for 150,000 blacks to march on Washington to protest discrimination in defense industries. Embarrassed and concerned, Roosevelt issued an executive order prohibiting discrimination in defense industries and creating the Fair Employment Practices Commission (FEPC).

During the war, the Marines excluded blacks, the Navy used them as servants, and the Army created separate black regiments commanded mostly by white officers. The Red Cross even segregated blood plasma.

As urban areas swelled with defense workers, housing and transportation shortages exacerbated racial tensions. In 1943, a riot broke out in Detroit in a federally-sponsored housing project when whites wanted blacks barred from the new apartments named, ironically, in honor of Sojourner Truth. White soldiers from a nearby base joined the fighting, and other federal troops had to be brought in to disperse the mobs. The violence left 35 blacks and 9 whites dead.

Similar conflicts erupted across the nation exposing, in each instance, the same jarring contradiction: White Americans espoused equality abroad but practiced discrimination at home. One black soldier told Swedish social scientist Gunnar Myrdal, "Just carve on my tombstone, here lies a black man killed fighting a yellow man for the protection of a white man." A 1942 survey showed that many black Americans sympathized with the Japanese struggle to expel white colonialists from the Far East. Significantly, the same survey revealed a majority of white industrialists in the South preferred a German victory to racial equality for blacks.

During World War II, the NAACP intensified its legal campaign against discrimination, and its membership grew from 50,000 to 500,000. Some African Americans, however, considered the NAACP too slow and too conciliatory. Rejecting legal action, the Congress of Racial Equality (CORE), founded in 1942, organized a series of "sit-ins." Civil disobedience produced a few victories in the North, but the South's response was brutal. In Tennessee, for example, angry whites savagely beat the civil rights leader Bayard Rustin for refusing to move to the back of the bus.

Almost 400,000 Mexican Americans served in the armed forces during the war. For many Mexican Americans, jobs in industry provided an escape hatch from the desperate poverty of migratory farm labor. In New Mexico, about one-fifth of the rural Mexican American population left for war-related jobs.

The need for farm workers rose dramatically after Pearl Harbor. To meet the demand, the United States established the Bracero (work hands) Program in 1942, and by 1945, several hundred thousand Mexican workers had immigrated to the Southwest. Commercial farmers welcomed them; labor unions, however, resented the competition, leading to animosity and discrimination against Mexicans and Mexican Americans alike.

In Los Angeles, ethnic tensions erupted into violence. Anglo society feared and resented newly formed Mexican American youth gangs, whose members celebrated their ethnicity by wearing flamboyant "zoot suits." In June 1943, hundreds of Anglo sailors, on liberty from nearby naval bases, invaded downtown Los Angeles. Eager to put down the Mexican American youths, they attacked the zoot suiters, and riots broke out for several nights. The local press blamed the Mexican American gangs, and the riots did not end until military police ordered sailors back to their ships.